Equalizer... the stereo one octave edition?

I'm still in GA for a few hours until my flight for NYC leaves, so I spent a few hours reworking my ghetto equalizer. Since more features are always better (amirite guise?), I've changed the design from a mono five band eq to a a stereo eight band eq -- pretty much the threshold at which the thing actually becomes useful instead of a toy.

I changed the design to use the Dangerous Prototypes Sick of Beige PCB profile template because it's more thought out than the mess of arbitrarily placed standoff holes that I had before. The board is also supposedly more "aesthetically pleasing" because the aspect ratio is the Golden Ratio. I personally think that that's a load of garbage, but hey, if anything can make this even more beautiful than I plan on making it, why not? Anyway, the board currently looks like this: 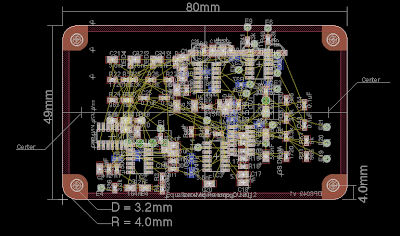 I don't have nearly half the components placed and everything is just in a big blob right now, but... ROUNDED EDGES~!

I'm still sticking to the super awesome OPA1644 opamps, graciously and unknowingly sponsored by TI through their sample program. I'm using the TSSOP packaging this time instead of SOIC. TSSOP is a surface mounted device packaging standard, and SOIC is another. The acronyms are typical irrelevant nonsense, so have this picture instead:

Yeah, this board is basically going to be awesome.

Posted by Greg Shikhman at 1:47 AM